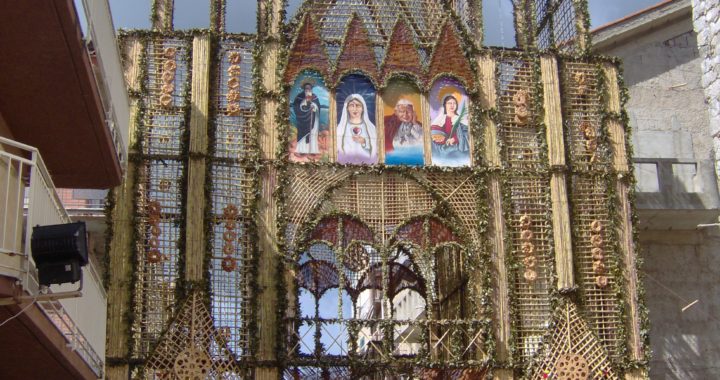 It’s Easter time again, though it may be quite different to previous years for many of us.

Over in Sicily, Easter is generally considered the most significant religious period of the year, and this month would have seen many celebratory festivals throughout its regions. One of the most obscure (because yes, there are other worthy contenders for that title on the island) is from our family’s region, Agrigento. The ‘Archi di Pasqua’ (Arches of Easter) festival, also known as the ‘Archi di Pane’ (Arches of Bread) festival, has been held in the town of San Biagio Platani for around 300 hundred years.

During the months leading up to the event, the entire town join one of two teams – either Madunnara (the confraternity of Mary) or ‘Signurara’ (the confraternity of Jesus) – and each develop top-secret plans to outdo the other. Everyone chips in where they can, from children to grandparents, and by their hard work the main thoroughfare is transformed from a simple road to something quite different, something spectacular.

Grand arches appear, along with domes, towers, chandeliers, and elaborate artwork. But this is Sicily, and those things can be seen all over the island, right? Very true, but not like this. You see, a portion of the harvest is put to one side and these natural, locally sourced materials are the key to festival’s unique identity.

The result is something that would make Willy Wonka drool; instead of the usual tufa stone, marble, plaster, iron, and glass, San Biagio’s temporary open-air cathedral is constructed from willow, sugarcanes, reeds, rosemary, dates, barley, pasta, rice, and bread. Lots of bread.

Walking through, your eyes feast upon some of the most curious architecture and artwork you’re ever likely to experience. You’re not sure whether they should be applying for World Heritage status or a Michelin star, but the ingenuity, skill, and sheer audacity will captivate and intrigue you.

This year, for obvious reasons, this festival has been postponed, like so many other events across the globe. Maybe you plan on doing something new this weekend, whether it be having a family meal via Zoom, or trying to make your own chocolate – this is both fun and very satisfying!

Whatever you’re up to, share some love with those around you, pay extra thought to the people who will spend this weekend (or longer) alone, and if your anaemic looking Warburton’s white isn’t quite inspiring you, hop into your web explorer outfit, search for ‘Sicilian bread festival’, and enjoy a visual meal like no other.